"There's a fine line between fishing and standing on the shore like an idiot."
Steven Wright

I love fly fishing slang. You know... those funny, weird, descriptive phrases we use to describe things. Many of these slang phrases begin with guides so I call it guidespeak. But whatever you call it, we all know it when we hear it and I'm sure we all agree it's descriptive, colorful and lots of fun.

Slang is important too. It helps us communicate and convey crucial concepts, but more importantly, slang lets us know where we stand in the tribe... don't know the lingo and you are relegated to a newbie or worse yet, a bait fisherman. 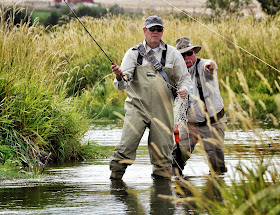 Each generation of fly fishermen makes contributions to this vernacular. Slang therefore reflects the health of our sport. If no new slang words are entering the lexicon, that's not a good sign. If new slang abounds, then many new faces can usually be seen in the fly shops and on the water. You'll be happy to know that our sport is indeed healthy!

What follows are some on my favorites. If you know all these colorful terms, you're on the cutting edge. If not please read carefully, there will be a quiz afterwards.

Dope-on-a-rope: A guy that hogs a good spot by dropping anchor on it.


Buzzing the tower: A cast that whizzes by the guide's head and elicits a duck or flinch.
Over the shoulder boulder holder: The cast that propels a heavily weighted nymph or streamer in a circular fashion. Low on the backcast then over the top on the delivery cast.

Hung: To get hooked-up

Garbaged: When a fish eats a fly with no hesitation he "garbaged" it up.

Water Whippers which is the same as Flea Flickers: Term for fly fishermen. As there were two "water whippers" in that pool.

Darrells: Spinheads or bait fishermen who are killing fish. They come with mullets, tall boy Coors lights in cozies, NASCAR hats and a lower lip swollen with chew.

Convict: similar to a Darrell, but worse because they snag fish.

Farmer: One who constantly loses fish.

Barney: A term used to describe an angler who claims to know everything, but can't get hung. 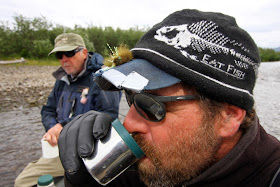 Bead off: Alaska guide's term for fishing with a bead. Enough said.

Drive By: In the west, it's a fast, high gradient river that only gives you one chance at a spot as you float by. Alternate definition is when a fish hits a fly, but doesn't stay on. Often a drive by happens more often to farmers and Barneys. A guide might say "we had a couple of drive bys, but no hook-ups".

Tatering: Screwing up. Best if done so sensationally that it's clear to everyone you screwed up. If you're smart, you then anticipate the derogatory comments by making them first yourself. As in "Man, I tatered that cast! I suck!" Used to be called cheesing. As in, "I cheesed that cast! I suck!"

Reduced:  Hooking a good fish and losing it in some creative and dramatic way rather than just comingunbuttoned(unhooked). Getting spooled, falling, your fly line catching on your fighting butt, snapping off on a rock or tree... all these qualify.

Cross their eyes: A proper hook set. A guide might say "He's on, cross his eyes". If the client doesn't see the strike or responds with a mamby-pamby hook set, a guide might escalate his order by demanding "Set the hook before he shits it out!"

Wood shampoo: When killing a salmon for dinner, guides often pick up a short log and whack the fish over the head… this is a wood shampoo. This term has been around for awhile but I still like it! If you kill more than one fish to serve more people you "whack 'em and stack 'em".

In its pajamas: A salmon that is spawned out.

Bank maggot: The same as beach lice. Bank fishermen that don't give way to a floater in a drift boat or raft.

Swamp donkey: A moose. Typically one that stands in the spot you want to fish.

Locked Down: Drag tightened as far as possible. Same as pegged. Not to confused with button-down which is to tighten down your drag. 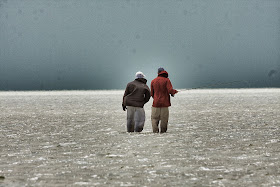 Captainitis: When a guy first gets his captains license and starts acting like a jerk, barking orders etc.

Grump: a large old fish of any species that is usually pretty beat up.

Chewed: Getting bit. This often leads to being hung unless you are a farmer or a Barney.
at September 18, 2014

Shop Update- We have an on line shop at  https://shop.conejosriveranglers.com/  this will allow you to order anything we have online and pa...